Edit
watch 01:25
Jurassic World: Dominion Dominates Fandom Wikis - The Loop
Do you like this video?
Play Sound
For the town, see Panhandle, Texas.

The Texas Panhandle is a region of the U.S. state of Texas consisting of the northernmost 26 counties in the state. The panhandle is a rectangular area bordered by New Mexico to the west and Oklahoma to the north and east. The Handbook of Texas defines the southern border of Swisher County to be the southern boundary of the Texas Panhandle region, though some consider the region to extend as far south as Lubbock County[1].

West of the Caprock Escarpment and north and south of the Canadian River breaks, the surface of the Llano Estacado is rather flat. South of the city of Amarillo, the level terrain gives way to Palo Duro Canyon, the second largest canyon in the United States. This colorful canyon was carved by the Prairie Dog Town Fork Red River. North of Amarillo lies Lake Meredith, a reservoir created by Sanford Dam on the Canadian River. The lake, along with the Ogallala Aquifer, provide drinking water and irrigation for this moderately dry area of the high plains.

Because the Act of Admission of Texas into the Union allows the state to divide itself, a bill was introduced to the Texas legislature in 1915 in order to create a State of Jefferson, made up of the Texas Panhandle.[2]

The Texas Panhandle has been identified as one of the fastest-growing wind-power-producing regions in the nation over the past decade because of its strong, steady winds. [3]

Demographics of the Panhandle[]

The 26 northernmost counties that make up the Texas Panhandle include:

Major cities of the Texas Panhandle with populations greater than 10,000 include:

Some of the smaller towns with populations less than 10,000 include:

Amarillo is the largest city in the Texas Panhandle. 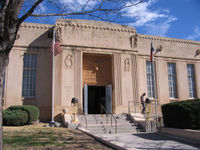 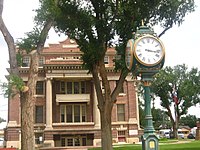 Much like the Oklahoma Panhandle, the region is very politically and socially conservative. It was one of the first regions of the state to break away from its Democratic roots, though Democrats continued to do well at the local level well into the 1980s. However, Republicans now dominate every level of government, holding nearly every elected post above the county level.

In the 2008 Presidential Election, John McCain received 78.82% of the vote, as compared with Barack Obama's 20.48% share of the vote. Other candidates received 0.70% of the total vote. However, most (62.2%) of Barack Obama's votes came from Potter and Randall Counties, near Amarillo, the only large city in the region, with the rest of the panhandle being even more strongly conservative. In Ochiltree County, John McCain received 91.97% of the vote.

Nearly all of the Panhandle is in Texas's 13th congressional district

, represented by Republican Mac Thornberry. With a Cook Partisan Voting Index of R+29, it is tied for the most Republican district in the nation. The counties of Castro, Deaf Smith, and Parmer are in the Texas's 19th congressional district