Thomas married Mary Elmira Brown, daughter of Robert Brown and Sarah England, on January 17, 1875 in Pennsylvania. In 1880, Thomas, Mary and their two children are living in Huston Township, Clearfield County, Pennsylvania where Thomas "worked in the woods." This probably means that he was sawyer. By 1900, Thomas worked as a farmer, and they lived on a farm on Baumertown Road in Weedville, Pennsylvania. Thomas and Mary had a total of 15 children. Of these 15, 13 survived to adulthood. Thomas lived on the farm for the remainder of his life. He died on June 15, 1915 at the age of 67. He was buried at Mt. Zion Cemetery on June 17, 1915. 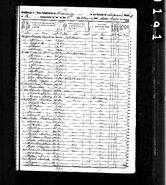 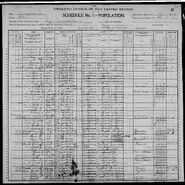