Familypedia
Register
Don't have an account?
Sign In
Advertisement
in: Arthur (surname), Born in 1835, Died in 1902,
and 7 more

It was June 1855, and twenty-year-old Gunner and Driver Thomas Arthur, a member of the Royal Artillery Regiment, was with his artillery battery in an advanced position at Sebastopol. The British were attacking the Russians in an endeavour to capture a place known as the Quarries.

Thomas Arthur was in charge of the ammunition magazine but his deeds went well beyond that call of duty. The fighting was intense and he realised that infantry of the 7th Fusiliers were short of ammunition. Despite having to cross open ground, under fire from the enemy, he made repeated runs carrying supplies of ammunition. Eleven days later, he volunteered to lead a party to spike the guns of the Russian artillery who were positioned at the Redan, a fortified gun position. For this combination of heroic actions, he was awarded the Victoria Cross.

His devoted heroism is also recorded for sallying out of the trenches on numerous occasions and bringing in wounded officers and men[1].

Thomas McArthur - Real name or AKA!

Abbotsham is a small village just three miles west of Bideford, North Devon, and 57 miles north of Devenport, Plymouth, Devon, where Thomas enlisted in the Army in 1853.

1841 Census in June, Abbotsham, three miles west of Bideford, North Devon. 1841 census states all were born in the same county (i.e. Devon), although the census records of this period are often incomplete and ages quoted unreliable (notably: adults' ages were required to be rounded down to multiples of 5).

1851 Census – neither Arthur nor McArthur family yet found.

Life in the British Army

Thomas enlisted at Devonport in March 1853 for service in the Royal Regiment of Artillery. His attestation record shows he was 18 and was born in the Parish of Abbotsham, near Bideford, Devon.

Thomas was sent to London for the Royal Artillery Depot, where for 1 shilling 3 ¼ d a day (approx. 6.35p, £0.06), including one penny beer money, he had an uneventful life until the start of the Russian war in the Crimea late in the autumn of 1854.

Thomas Arthur and his comrades of No.1 Company, 5th Battalion, left Woolwich, London towards the end of November 1854 to embark at Liverpool in the good ship Niagara; they sailed for the Crimea on 1 December.

When they arrived conditions in the Crimea were poor, in January 1855 seven men died; more in February, due solely to sickness and disease, including scurvy, severe dysentery, starvation and exposure. Many of the sick ended up in Scutari Barracks (Selimiye Barracks). Florence Nightingale arrived there on 4 November 1854 with 38 volunteer women, where she spent most of her time until her return home in 1857; she did however spend two short periods at Balaklave where Thomas spent a short spell to recover in 1855.

Thomas spent a short period in the trenches before Sebastopol where No.1 company manned static guns.

The official citation for the award of the cross was published in the London Gazette on 24 June 1857 and read: -

“When in charge of the magazine in one of the left advance Batteries of the Right Attack on 7th June 1855 when the Quarries were taken he, on his own account, carried barrels of Infantry ammunition for the 7th Fusiliers several times during the evening across the open.

Volunteered for, and formed one of the Spiking parties of Artillery at the assault on the Redan on the 18th June 1855”.

The book by Sergeant Gowing of the 7th Fusiliers “Voice from the Ranks” quotes: -

"I had the honour of taking a man’s name that evening for a most daring act; bringing up a barrel of ammunition on his head across the open field under tremendous fire, throwing it at our feet, exclaiming ‘here you are, my lads, fire away!’

"I had the pleasure of meeting him afterwards in India, with the Cross upon his noble breast – Gunner Arthur".

The Quarries action was to capture what was little more than holes in the ground being used by the Russians as defensive works in advance of the Redan. An assault on that fort was the ultimate objective of the British, but too few men were used, about a thousand, and in ejecting the Russians it cost the 7th Fusiliers and the Connaught Rangers about half their numbers. The Battle was in the early evening, then the Russians spent most of the night trying to re-take the Quarries but were beaten off.

On the 18th June, by orders of the Commander-in-Chief, Lord Raglan, an attempt was made to recapture the Redan in support of the co-ordinated attack with the French against the Russians. The attempt was bloodily repulsed as was the French assault on the Malakoff, another fort, despite British military support being committed to the French by Lord Raglan. In the face of devastating fire British and French troops were mown down in large numbers, and few got anywhere near the Redan. It was at this point that Thomas volunteered and formed a Spiking party to dash through the smoke and turmoil. It is unclear whether they were successful, but nevertheless Thomas, who was slightly wounded during the attempt, was awarded the VC for his acts of bravery.

Back to Blighty; marriage and family

On a pay of 1 shilling 3 ¼ d (unchanged) and a small field allowance, he left the Crimea with his Battery in mid February 1856, when the war was more or less over, and arrived in Woolwich in the middle of March.

Thomas left Woolwich in May 1856 for Liverpool where in September he had a brief absence and was deprived some pay. He was absent again, for just one day, shortly after the publication of his VC citation in February 1857. Later the same year, by Regimental Court Martial, he was sentenced to 28 days imprisonment from 21 May to 17 June 1857 and spent his time in Weedon Military prison, Weedon Bec, Northamptonshire,

On his release from Weedon, just nine days before he was due to appear before Queen Victoria to receive the Victoria Cross, he was transferred from No.1 to No.2 Company of the 5th Battalion and his pay for the time spent in prison was not docked. He travelled from Weedon to Woolwich, London where he received a summons to appear at Portman Street Barracks on 25 June to be marched to Hyde Park on the next morning under the command of Lt. Knox of the 2nd Battalion, the Rifle Brigade, with the rest of the other rank heroes. The commander of the Barracks had to ensure that each man had a loop of red or blue cord attached to the left breast of the tunic (in Thomas’s case it was blue) where Her Majesty would fasten the Victoria Cross. There were five members of the Royal Artillery to be decorated, four officers and Thomas. The presentations were made in order of precedence i.e. Royal Navy, Royal Marines, Cavalry, Royal Artillery, Royal Engineers, Foot Guards, and Infantry of the Line, and each recipient by seniority of rank in each unit. Thomas Arthur was the fifth in the Royal Artillery to be decorated and the 23rd out of 62 on parade. After his death his Victoria Cross was sold on 19 July 1902 for £47 and later purchased by the Royal Artillery Institute.

In November 1857, and still on 1 shilling 3 ¼ d a day, he moved with his unit to Northampton where his Battery became a Field Artillery unit with a full complement of horses and guns, and in March 1858 Thomas was made an acting bombardier, unpaid.

On 6 July 1859 at Aldershot, Hampshire, he married Ann Goddard, aged about 27, from Hornstead, Berkshire.

By January 1860 his Battery had become part of the 8th Brigade and he was no longer an acting Bombardier, and instead of reverting to his old rank of Gunner and driver he was just Gunner, in which he had a few absences without leave, his Battery moved to Devonport, Plymouth, Devon (where his Army career had started).

In 1861 his first child, Jeanetta Arthur, was born in Plymouth Devon. After a short spell in hospital in 1862 Thomas had 28 days furlough (long leave), and the following year, in 1863, his second child, Emily E Arthur, was born, also in Plymouth, Devon. Later the same year his Battery moved to Ireland, where he served from 1863 until July 1866; on 20 February 1865 while he was serving in Ireland, Mary Ann Arthur was born at Ballincollig, County Cork, Ireland.

In July 1866 Thomas was granted 120 days furlough on full pay of 1 shilling 3 ¼ d a day prior to going to India with his unit, now called D Battery, 8th Brigade.

Also, within two years of arriving in India, and while still serving in the Army, Thomas Arthur changed his name to Thomas McArthur and his wife Ann changed her name to Britannia!

On 19 May 1874, after duty at Lucknow and other centres in Bengal, he retired from the Army on a princely sum of 1/-, one shilling, per day.

Life after the Army

After Arthur's retirement from the Army in 1874, the family left India and returned to England, where in c1876, in Bideford, Devon (near Arthur’s birth place), Sophia McArthur was born.

The last child of Thomas McArthur and his wife Britannia, Nelly McArthur, was born in Pucklechurch, Bristol, around 1879. In the same year, on 20 October 1879, Thomas Arthur's oldest child, Jeanetta Arthur, married Thomas Stickler at St Philip and Jacob, Bristol.

At the 1891 census Thomas with his wife and their youngest daughter, Nelly McArthur now aged about 11, were still living in Savernake, but now at 28 Salisbury Road, Cadley, South Savernake, Wiltshire; the older children having left home, and Thomas Arthur is shown as Thomas McArthur, Chelsea Pensioner (V.C).

The registration of his death at St.Catherines House puts his age as 66, suggesting a birth of c1836?[2].

In 1896 Aileen Ruby McArthur is living in London, where on 23 May of that year she marries Harvey Roach in St. Marylebone, London; and a few years later, on 28 October 1899, Sophia McArthur marries Thomas Davis in Maindee, Monmouthshire, Wales. The youngest daughter, Nelly McArthur marries Joseph Ford Parrott back at the family location in Savernake, Wiltshire on 20 June 1903. 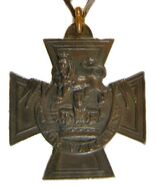