Familypedia
Register
Don't have an account?
Sign In
Advertisement
in: Lawrence (surname), Born in 1888, Died in 1935,
and 33 more

TE Lawrence was the 2nd of five illegitimate children conceived between his father, the 7th Chapman Baronet of Killua Castle, and his mother, who was the governess of his father's older children.  This family adopted the surname of Lawrence.  Two of his younger brothers died in the First World War.

His father, Thomas Robert Tighe Chapman, who, later, in 1914 inherited the title of seventh of in Ireland (), had abandoned his wife Edith for his daughters' governess Sarah Junner (born illegitimately of a father named Lawrence, and who had styled herself 'Miss Lawrence' in the Chapman household). The couple did not marry but were known as Mr and Mrs Lawrence.

He was with the Foreign Office, attending the Paris Peace Conference as part of Prince Faisal's delegation between January 1919 and May 1919. He was advisor to the Colonial Office in 1921.

On 13 May 1935 at Wareham, Dorset, England, he was injured when he fell from his Borugh Superior SS100 motorcycle. 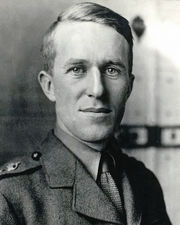