Familypedia
Register
Don't have an account?
Sign In
Advertisement
in: Non-SMW people articles, Tandberg (surname), Born in 1874,
and 4 more

The Tandbergs were from East Prussia and the name was originally "Tannenberg". Because of the constant warfare in Prussia, in 1570 they emigrated to Norway, which at the time was under Danish rule. They settled in "Ringerrike".

Thorvald was born on June 24, 1874 in Portland, Cumberland County, Maine. His family was coming to the United States through Canada.

In 1875 they were living at Nedre (Lower) Voldgade 11 in Kristiania, Norway. The family status for Andreas was tilreisende which translates as "visitor". Andreas was working in handlende (trade/commerce) and he was born in Hønefos. Living at home were: Christian Tandberg; and Thorvald Martin Tandberg.

He started as a wardroom boy and in three years he served on three different ships:

In 1898 he volunteered for the Spanish-American War but was rejected for service. In 1899 he learned the hotel business at the Grand Hotel in Portland, Maine.

In the 1900 Norway Census Thorvald and Alvilde were living at Niels Juelsgade 39 in Kristiania, and Thorvald was listed as working as the "Inspectør [of the] Grand Hotel" in "Portland, [Maine] Amerika". They were listed as: "Thorvald Martin Tandberg" and "Alvilde Marie Tandberg". With them was their daughter, "Ethel V.A. Tandberg". His parents were living at Stolmagergaden 3 in Kristiania. Andreas was listed as working as a "fabrikeier mek værksted & jernsengfabr." Valborg Margrethe Fischer was listed as "Walborg Tandberg" and her mother, Maren Kirstine Kronsteen Fischer (1821-1915), was living with them. The children at home were:

From 1899 to 1907 he was manager of the Holmenkollen Tourist Hotel where he met King Oscar of Norway and served him a drink of punch and seltzer. He quit because of the low pay and returned to the United States.

He lived at 778 Morton Street, Mattapan, Boston, Suffolk County, Massachusetts in 1915 after he married. He registered for the World War I draft while in Boston, but was too old to serve at age 46. He was indexed as "Thorbald Martin Tandberg". He served as senior warden for his district and after the war he was given a citation signed by the governor and the mayor.

In his unpublished autobiography, Scraps From the Heap Thorvald Martin Tandberg, circa 1954, at age 80 wrote: Scraps From the Heap by Thor Thorson Tandberg. After I retired in 1940, I have been urged by friends and family, to put down on paper, my many experiences in the vocation which I had adopted. They are generally written services to mankind, I can lay no claim to the Hotel and Restaurant field. I know that a Memoir about men or woman, that has achieved greatness through such as writers, scientists or Industrialists such recognition , However as my services has been a few gets a chance to accomplish, required in higher places, which only many in our line of business often remain at the same jobs their whole life without having the opportunity to advance them self to higher offices. Many have tried, but only a few are chosen , I have been fortunate of being one of the few, as I at an early age of 29 became manager of one of the finest resort Hotels in Norway, after spending nine years learning, first the Kitchen, then the dining room, then the front office and so on. It was a wise man that made this statement, 'Do not slight the man on your way up, for you will meet him on your way down'. How true, for after having been on the top and as you grow older one begins to slide back. Edgar Guests has written, that it takes a heap of living to make a home, and its from the heap, that I have plucked the scraps ... It was June [of 1909], and I was to meet my family at the south station that Sunday morning. We were closed, as you know on Sundays, so I had the full day. Thordis, when she saw me, started to cry. Then I took them to a taxi, to their new home, and told the driver to pass the Essex Street Restaurant on our way so they could see where I was working. When we arrived home the Andersens were there to greet them. And Mrs. Andersen had put the coffee on and prepared a meal for them as they had been traveling all night from New York. Mr. Stollman called me up as I had a phone already installed and asked how everything was. I told him they were now just having their first breakfast in their new home."[1] On December 29, 1960, Thorvald Martin Tandberg wrote Martha and Jarl: "December 29, 1960. Dear Martha and Jarl. It was nice to hear from you. I remember one Sunday long ago when we went to your house when it was [still] a forest of two by fours and beginning to [take the] shape of a home. I [always] admired the location and Joe [French] and Yolanda [Tandberg] told me how nice it was when they visited you some time ago."

When Autumn leaves are falling, they make our lawn a sight.
I put them down and pick them up and rake with all my might.
When at last the job is done, for a rest I have a yen.
Then comes a gust o'heavy wind and I start to rake again. 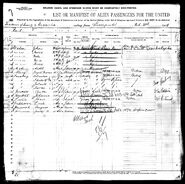 1908 manifest with family arriving in US 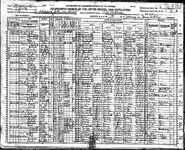 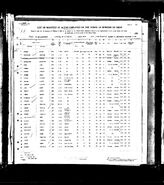 1930 September 10 as a crew member aboard the ship "Washington"

1956 article on him missing a boat that later sunk

1960 circa genealogy prepared by Thorvald
Community content is available under CC-BY-SA unless otherwise noted.
Advertisement