Tighes Hill is a north-western suburb of Newcastle, New South Wales and was named after A.A.P. Tighe, an early resident, who in 1843 bought the estate[1]. It is primarily an industrial area with residential parts expanding toward Mayfield. A video tribute has been filmed of this grand old suburb, featuring the Catholic Church. [1]

Tighes Hill developed from the construction of a bridge over Throsby Creek at the opening of the Ferndale Colliery in 1877. Within three years the suburb had a school, post office, church and stores. In April, 1894, a tram line was opened to Tighes Hill which extended to Mayfield in 1901.[2]

Tighes Hill provides housing near the CBD.[2] Tighes Hill has now become a trendy inner suburb of the Newcastle inner city area with a large influx of young professionals and families looking to live an inner city lifestyle at the affordable end of town. In August 2010, a property in Tighes Terrrace,Tighes Hill was sold at a record breaking price of $950,000 for this inner city suburb. The School of Arts building has had a variety of uses supporting arts and the community in Newcastle. Recently the building reopened as The Tighes Hill School of Arts, Gallery in January 2009. 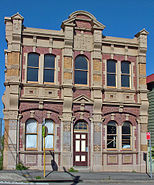 Plaque commemorating the laying of a foundation stone by Charles Upfold in 1900, for the School of Arts building