Timiș (Hungarian: Temes, Serbian: Tamiš (Тамиш), Banat Bulgarian: Timiš) is a county (județ) of western Romania, in the historical region Banat, with the county seat at Timișoara. It is the largest county in Romania in terms of land area.

The name of the county comes from the river Timiş, known in Roman antiquity as river Tibisis or Tibiscus.

The county is also part of the Danube-Kris-Mures-Tisa euroregion.

In the eastern extremity are the Poiana Ruscăi Mountains from the Southern Carpathians group. Elevations decrease to the west, passing through the Lipova Hills to the Western Romanian Plain, the eastern part of the Pannonian Plain.

The county is crossed by many rivers, the most important being the Bega River and the Timiş River. 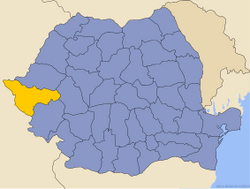 Timiş County has one of the most dynamic economies in Romania, being a region with among the highest ratings of foreign investment due to its tradition and its position.

The main tourist attractions in the county are:

There are also a lot of places for hunting and fishing.