Familypedia
Register
Don't have an account?
Sign In
Advertisement
in: Pages with non-numeric formatnum arguments, Cities and towns in Tver Oblast, Settlements in Tver Oblast, Established in 1139

Torzhok (Russian: Торжо́к) is a town in Tver Oblast, Russia, famous for its folk craft of goldwork embroidery. Population: 47 702 (2010)

The town is situated on the Tvertsa River, 38 miles northwest of Tver, and 145 miles from Moscow. The city is situated along the federal highway Russian Route M10, and a branch of the Oktyabrskaya Railway subdivision of Russian Railways.

Torzhok was first mentioned in a chronicle in 1139. The Mongols burnt it in 1238, but did not proceed northward to Novgorod. At that time the town commanded the only route whereby grain was delivered to Novgorod. Once Torzhok blocked the route, a great shortage of grain and famine in Novgorod would follow. Consequently, Torzhok was known as a key to Novgorod Republic and frequently changed hands during feudal internecine wars.

The town was incorporated into Muscovy with the rest of Novgorod Republic in 1478. The Polish army frequently ravaged it during the Time of Troubles. During the imperial period of Russian history, Torzhok was known as an important post station on the highway from Moscow to St. Petersburg. Alexander Pushkin, for instance, used to pass through Torzhok on a number of occasions, so there is a museum dedicated to him in the town. The natives of Torzhok include painter Alexej von Jawlensky.

Architectural monuments of Torzhok include a number of parish churches, dating back to the late 17th or early 18th centuries. Under Catherine the Great, the old monastery of Sts. Boris and Gleb was redesigned in Neoclassical style by a local landowner, Prince Lvov. The main city church is the Saviour-Transfiguration Cathedral, founded in 1374. The current edifice was consecrated in 1822. There is also Catherine II's diminutive travel palace. 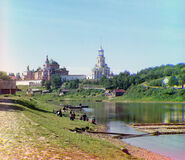 Torzhok is twinned with: