A tributary[1] or affluent[2] is a stream or river that flows into a larger stream or main stem (or parent) river or a lake.[3] A tributary does not flow directly into a sea or ocean.[4] Tributaries and the main stem river drain the surrounding drainage basin of its surface water and groundwater, leading the water out into an ocean. Irtysh is the chief tributary of the Ob river and is also the longest tributary river in the world. Madeira river is the largest tributary river by volume in the world.

A confluence, where two or more bodies of water meet together, usually refers to the joining of tributaries.

The opposite to a tributary is a distributary, a river or stream that branches off from and flows away from the main stream.[5] Distributaries are most often found in river deltas.

In the United States, where tributaries sometimes have the same name as the river into which they feed, they are called forks. These are typically designated by compass direction. For example, the American River in California receives flow from its North, Middle, and South forks. The Chicago River's North Branch has the East, West, and Middle Fork; the South Branch has its South Fork, and used to have a West Fork as well (now filled in).

Forks are sometimes designated as right or left. Here, the "handedness" is from the point of view of an observer facing upstream. For instance, Steer Creek has a left tributary which is called Right Fork Steer Creek.

Another method is to list tributaries from mouth to source, in the form of a tree structure, stored as a tree data structure.

A gallery of major river basins with tributaries 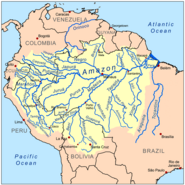 The basin of the Amazon River is a system made up of many tributary streams. The streams shown on the map besides the Amazon are tributaries of the Amazon. The Amazon is not a tributary of any other rivers because it ends in the Atlantic Ocean. 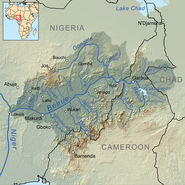 The Benue River is fed by multiple tributaries originating in the Adamawa Plateau; many of the highest tributaries are seasonal streams. The Benue is itself a major tributary of the Niger.

Huai River tributaries (which itself is a tributary of the Yangtze River). 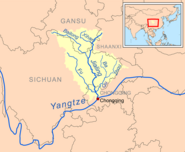 Jialing River tributaries (which itself is a tributary of the Yangtze River). 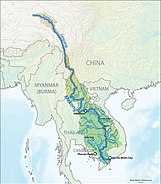 The Mekong is a trans-boundary river, originating in the Tibetan Plateau. Its upper tributary river systems (e.g. the Salween River) are restricted to narrow gorges, but the tributaries that feed its lower reaches (e.g. the Mun River) cover larger areas. 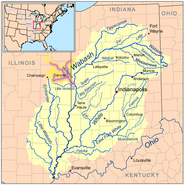 Wikimedia Commons has media related to:
Tributaries
Look up confluent in
Wiktionary, the free dictionary.
Community content is available under CC-BY-SA unless otherwise noted.
Advertisement