The first written record of Tver is dated 1135. Originally a minor settlement of Novgorodian traders, it passed to the Grand Prince of Vladimir in 1209. In 1246, Aleksandr Nevsky granted it to his younger brother Yaroslav Yaroslavich, who descended from a dynasty of local princes. Four of them were killed by the Golden Horde and were proclaimed saints by the Russian Orthodox church.

Formerly a land of woods and bogs, the Tver principality was quickly transformed into one of the richest and most populous Russian states. As the area was hardly accessible for Tatar raids, there was a great influx of population from the recently devastated South. By the end of the century, it was ready to vie with Moscow for supremacy in Russia. Both Tver and Moscow were young cities, so the outcome of their rivalry was far from being certain.

Michael of Tver, the patron saint of the city

The modern shrine of St. Michael of Tver

The equestrian statue of St. Michael of Tver

Mikhail of Tver, who ascended the throne of Vladimir in 1305, was one of the most beloved of medieval Russian rulers. His policy of open conflict with the Golden Horde led to his assassination there in 1318. His son Dmitry "the Terrible Eyes" succeeded him, and, concluding an alliance with the mighty Grand Duchy of Lithuania, managed to raise Tver's prestige even higher.

Exasperated by Dmitri's influence, Prince Ivan Kalita of Moscow engineered his murder by the Mongols in 1326. On hearing the news of this crime, the city revolted against the Horde. The Horde joined its forces with Muscovites and brutally repressed the rebellion. Many citizens were killed, enslaved, or deported. This was the fatal blow to Tver's pretensions for supremacy in Russia.

In the second half of the 14th century, Tver was further weakened by dynastic struggles between its princes. Two senior branches of the ruling house, those of Kashin and Kholmsky, asserted their claims to the grand ducal throne. The claimants were backed up by Moscow and eventually settled at the Moscow Kremlin court.

During the Great Feudal War in Muscovy, Tver once again rose to prominence and concluded defensive alliances with Lithuania, Novgorod, Byzantium, and the Golden Horde. Grand Prince Boris of Tver sent one of his men, Afanasiy Nikitin, to search for gold and diamonds as far as India. Nikitin's travelogue, describing his journey from 1466 to 1472, is probably the first ever firsthand account of India by a European. A monument to Nikitin was opened on the Volga embankment in 1955.

At last, on September 12, 1485, the forces of Ivan the Great seized the city. The principality was given as an appanage to Ivan's grandson, only to be abolished several decades later. Last scions of the ruling dynasty were executed by Ivan the Terrible during the Oprichnina. At that turbulent time, Tver was ruled by Simeon Bekbulatovich, a former khan of Kasimov. The only remnant of his ephemeral reign is a graceful tent-like church in the village of Kushalino, 28 km north-east of Tver.

The city's decline was not irrevocable, however. With the foundation of St. Petersburg, Tver gained importance as a principal station on the highway (and later railway) from Moscow to St. Petersburg. It was much visited by Russian royalty and nobility travelling from the old capital to the new one and back.

Following a great fire of 1763, the city was rebuilt in Neoclassical style. Under Catherine the Great, the downtown was thoroughly reconstructed. Crumbling medieval buildings were razed and replaced with imposing Neoclassical buildings. The most important of these are the Travel Palace of the Empress (designed by the celebrated Matvei Kazakov), and the Ascension church (designed by Prince Lvov and consecrated in 1813).

In 1931, the city was renamed Kalinin, after the Soviet leader Mikhail Kalinin who had been born nearby. A last vestige of the pre-Petrine epoch, the Saviour Cathedral, was blown up in 1936. In 1940 the NKVD executed more than 6,200 Polish policemen and prisoners of war from Ostashkov camp.

The Wehrmacht occupied Kalinin for two months in 1941, leaving the city in ashes. A large-scale resistance movement in the city and the region resulted in over 30,000 German soldiers and officers being killed during the occupation of the city. Kalinin was the first major city in Europe to be liberated from the Wehrmacht.

During the Cold War Kalinin was home to the air base Kryuchkovo, which is no longer in service. The historic name of Tver was restored in 1990.

Apart from the suburban White Trinity Church (1564), there are no ancient monuments left in Tver. The downtown is graced with Catharinian and Soviet edifices, bridges and embankments. Tver's most notable industries are a railroad car plant, opened in 1898, an excavator factory, and a glass making factory. Tver is home to Migalovo, which is one of Russia's biggest military airlift facilities.

Tver is home to Tver State University, the most highly rated university of the region. It is also home to the Tver State technical university, medical, and agricultural academies and more than 20 colleges and lyceums, branch campuses of some Moscow higher educational institutions and more than 50 high schools.

The Tver State Medical Academy is a medical school located in Tver, one of the largest and most reputable in Russia.

Tver also has around 50 secondary schools, a private school (lycee) and a Suvorov military school 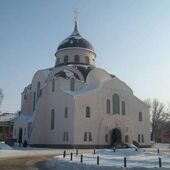 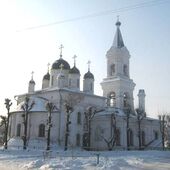 Tver is on the main railway line and the main motorway linking Moscow and St Petersburg. There is a river boat terminal on the River Volga. Local public transport consists of buses, trolleybuses, trams, and suburban trains.

Tver is home to:

Tver is twinned with: