Vasili II was the youngest son of Vasili I of Moscow by Sophia of Lithuania, the only daughter of Vytautas the Great, and the only son to survive his father (his elder brother Ivan died in 1417 at the age of 22). On his father's death Vasili was proclaimed Grand Duke at the tender age of 10. His mother acted as a regent. His uncle, Yuri of Zvenigorod (Prince of Galich-Merya), and his two sons, Vasili the Cross-Eyed and Dmitri Shemyaka, seized on the opportunity to advance their own claims to the throne. These claims were based on the Testament of Dmitri Donskoy, Yuri's father and Vasili's grandfather, who had stated that if Vasili I, died Yuri would inherit the principality. However, Dmitri had written the testament when Vasili I had no children of his own, and it might be argued that this provision had been made only for the case of Vasili's childless death. Vasili's claim was supported by Vytautas, his maternal grandfather. The underlying causes for the great feudal war that followed are disputed. There are reasons to believe that Yuri's family, whose Northern dominions were rich in salt, ore, and other minerals could offer Russia a more liberal, prosperous path of development.

Upon Vytautas' death in 1430, Yuri went to the Golden Horde, returning with a license to take the Moscow throne. But the Khan did not support him any further, largely due to the devices of the prince of Smolensk princeling and Moscow boyarin Ivan Vsevolzhsky. When Yuri assembled an army and attacked Moscow, Vasily, betrayed by Vsevolzhsky, was defeated and captured by his enemies (1433). Upon being proclaimed Grand Prince of Moscow, Yuri pardoned his nephew and sent him to reign in the town of Kolomna. That proved to be a mistake, as Vasili immediately started to plot against his uncle and gather all sort of malcontents. Feeling how insecure his throne was, Yuri resigned and then left Moscow for his Northern hometown. When Vasili returned to Moscow, he had Vsevolzhsky blinded as a traitor.

Meanwhile, Yuri's claim was inherited by his sons who decided to continue the fight. They managed to defeat Vasili, who had to seek refuge in the Golden Horde. After Yuri died in 1434, Vasili the Cross-Eyed entered the Kremlin and was proclaimed new Grand Duke. Dmitri Shemyaka, who had his own plans for the throne, quarreled with his brother and concluded an alliance with Vasili II. Together they managed to banish Vasili the Cross-Eyed from the Kremlin in 1435. The latter was captured and blinded, which effectively removed him from the contest for the throne.

Vasili's reign saw the collapse of the Golden Horde and its break up into smaller Khanates. Now that his throne was relatively secure, he had to deal with the Tatar threat.

In 1439, Vasili had to flee the capital, when it was besieged by Olug Moxammat, ruler of the nascent Kazan Khanate. Six years later, he personally led his troops against Olug Moxammat, but was defeated and taken prisoner. The Russians were forced to gather an enormous ransom for their prince, so that Vasily could be released some five months later.

During that time, the control of Moscow passed to Dmitri Shemyaka. Keeping in mind the fate of his own brother, Dmitri had Vasili blinded and exiled him to Uglich (1446). Hence, Vasili's nickname 'the blind' (Tyomniy, literally 'dark'). As Vasili still had a number of supporters in Moscow, Dmitri recalled him from exile and gave him Vologda as an appanage. That proved to be a new mistake, as Vasili quickly assembled his supporters and regained the throne.

Vasili's final victory against his cousin came in the 1450s, when he captured Galich-Mersky and poisoned Dmitri. The latter's children managed to escape to Lithuania. These events finally put to rest the principle of collateral succession, which was a major cause of medieval internecine struggles.

Now that the war was over, Vasili eliminated almost all of the small fiefs in Moscow principality, so as to strengthen his sovereign authority. His military campaigns of 1441-60 increased Moscow's hold over Suzdal, the Vyatka lands and the republican governments of Novgorod and Pskov.

In the meantime, Constantinople fell to the Turks, and the Patriarch agreed to acknowledge the supremacy of the Pope in the Council of Florence. Vasili promptly rejected this arrangement. By his order in 1448, bishop Jonah was appointed metropolitan of Russia, which was tantamount to declaration of independence of the Russian Orthodox Church from the Patriarch of Constantinople. This move further strengthened Russia's reputation among Orthodox states.

In his later years the blind prince was greatly helped by Metropolitan Jonah, boyars, and then by his older son Ivan III who was styled co-ruler since the late 1450s. On Vasili's death in 1462 Ivan III succeeded him as Grand Prince of Moscow. His daughter Anna was married to a Prince of Ryazan. 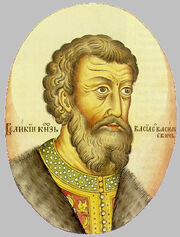