In 1880 they emigrated to Brooklyn, New York. He returned to Sweden when his mother died in 1886.

He was born in Silbodal, Värmland County, Sweden, he was only a year old when his family moved to Brooklyn, New York where he remained until the death of his mother when he was seven years old. Returning to live with relatives in Stockholm, he was 17 years old when he began his acting career on stage as a member of a touring theater company. From this, he went on to become one of the most important forces in the development of the Swedish film industry. Drawn from the stage to the fledgling motion picture industry, he made his first silent film in 1912 under the direction of Mauritz Stiller. Between then and 1923, he directed another forty-one films before accepting an offer from Louis B. Mayer to work in the United States. In Sweden, he acted in his own films as well as in those for others but in Hollywood, he devoted himself to directing. In 1924, using the Americanized name, Victor Seastrom, he made Name the Man, a dramatic film based on the Hall Caine novel. He went on to direct great stars of the day such as Greta Garbo, John Gilbert, Lillian Gish, Lon Chaney, and Norma Shearer in another eight films in America before his first talkie in 1930. Uncomfortable with the modifications needed to direct talking films, Victor Sjöström returned to Sweden where he directed two more silent films before his final directing effort in 1937, an English language drama filmed in the United Kingdom titled Under the Red Robe. For the next fifteen years, Sjöström performed a variety of leading roles in more than a dozen films and worked as director of the "Svensk Film Industri." At age 78 he gave his final acting performance, an acclaimed effort in the 1957 Ingmar Bergman film, Wild Strawberries. Victor Sjöström died in Stockholm at the age of eighty and was interred there in the Norra begravningsplatsen.[1]

Maximilian Schmige writes: "[They started as a poor family] that became rich very quickly before going bankrupt again. [Victor Sjöström]’s father had started an agency in America. The rest of the Sjöström family soon moved over to America. Unfortunately, Victor Sjöström’s mother died not longer after settling in. Victor Sjöström was sent back to Sweden to the town of Uppsala. His father transferred as much money as Sjöström would ask for. Victor Sjöström grew up believing he could get whatever he wanted. Victor Sjöström’s life changed, when the financial bankruptcy surrounding his father’s agency was revealed. To help earn money Victor Sjöström had to leave school and start selling bakery goods on the streets. Against his father’s will, and a forged written permission, With sixteen Victor Sjöström went off to tour with Swedish theatre companies in Finland. With more practice Victor Sjöström soon mounted the ladder in becoming a well-known actor." [2]

His mother, Elisabeth, a former regional theatre actress and sister of Victor Hartman of Royal Dramatic Theatre fame, died of puerperal fever in 1886, and his father subsequently married a younger woman who had previously been the family nanny. Victor had a strained relationship with his stepmother and this, together with his father's growing religious austerity, caused the somewhat unruly Victor to be sent home alone to Sweden in 1893 to live with his aunt in Uppsala. [3] 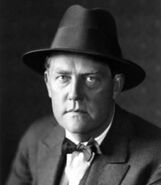