Vincent Leonard Price, Jr. was an American actor, well known for his distinctive voice and serio-comic performances in a series of horror films made in the latter part of his career. He was married three times.

Price attended St. Louis Country Day School. In 1933, he graduated with a degree in art history from Yale University, where he worked on campus humor magazine The Yale Record. After teaching for a year, he entered the University of London, intending to study for a Masters Degree in Fine Arts. Instead, he was drawn to the theater, first appearing on stage professionally in 1934. His acting career began on stage in London in 1935, and he performed with Orson Welles's Mercury Theatre.

Price married three times. His first marriage with former actress Edith Barrett produced his only son, Vincent Barrett Price. Price later married Mary Grant Price, and they had a daughter, Mary Victoria Price, on April 27, 1962. She was named Victoria after Price's first major success in the play Victoria Regina. Together, Price and Mary Grant Price donated hundreds of works of art and a large amount of money to East Los Angeles College in the early 1960s in order to endow the Vincent Price Art Museum there. Price's last marriage was to the Australian actress Coral Browne, who appeared with him (as one of his victims) in Theatre of Blood (1973). He converted to Catholicism to marry her, and she became a U.S. citizen for him. 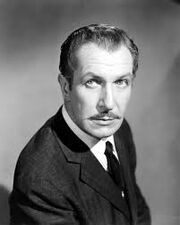