Vladimir Oblast (Russian: Влади́мирская о́бласть, Vladimirskaya oblast) is a federal subject of Russia (an oblast). Its administrative center is the city of Vladimir, which is located 190 kilometres (120 mi) east of Moscow. The 12th-century cathedrals of Vladimir, Suzdal, Bogolyubovo, and Kideksha are inscribed on the UNESCO World Heritage List.

The territory is located in the heart of the East European Plain , the main part of the territory - slightly hilly plain with a general lowering of the Klin-Dmitrov Ridge (altitude to 271 m) to the north, through Vladimir (Yuryevo) Opole (height 236 m), then south to Meshcherskaya lowlands (average altitude 120 m) and east across the Oka-Tsninsky shaft (up to 184 m) and Gorokhovets spur (upper point - 191 m) to Balakhna lowland (90 m) and the mouth of the Klyazma (67 m).

The main mineral resources of the region are limestone, peat, construction sand and stone, refractory and brick clays. Reserves of peat in the amount of 59 million tons, most of them lies within Meshcherskaya lowlands. Total deposits of limestone are 30 million tons and are located in the Oka-Tsninskogo shaft, where their thickness reaches 130 meters (Kovrov, Vyaznikovsky, Sudogodskoye, Selivanovsky areas).

Quartz sand - clean, small, almost no impurities of clay particles of glacial origin are federal significance, in large numbers occur in the southern region (Gus-Crystal and Melenkovsky areas). Sands used for the production of glass and crystal . Also in the area there are phosphates , iron ore , there are small deposits of gypsum , fluxing materials and metallurgical dolomite local significance.

In the region there are natural sources of mineral waters.

The climate of the area is temperate continental with warm summers and moderately cold winters and pronounced the transitional seasons. The duration of the period with average temperature below 0 ° C - 137 days, the mean annual temperature 5 ° C (standard deviation of 12 ° C), the average January temperature of -11 ° C in the north-west region to -12 ° C in the southeast, in July about +18 ° C. The average annual rainfall of 550-600 mm, the maximum precipitation occurs in summer. In winter, forming a stable snowpack, the average thickness of snow cover of 40 mm (the average is 144 days). Vegetation period is 160-180 days.

The overall surface cover by water in the oblast is 32.9 thousand ha.

The main rivers of the area are the Klyazma and Oka. The oblast has 560 large and small rivers with a total length of more than 8,6 thousand km. The Klyazma flows into the Oka River in the south-eastern outskirts of the border with the Nizhny Novgorod Oblast. The biggest tributaries of the Klyazma are Shearn (with the influx of Molokcha ) Kirzhach (with its tributaries Large and Small Kirzhach ) Peksha , Koloksha , Nerl , Sudogda , Uvod , Luh , Suvorosch, and the tributaries of the Oka are Gus, Unzha and Ushna. The Dubna River, a tributary of the Volga originates near Aleksandrov. The Oka River is navigable on the entire reach crossing the Oblast (157 km). Generally the rivers have wide valleys and meandering channel. The hydrologicr regime of rivers is characterized by high spring and low summer-autumn discharges water with individual floods during heavy rains.

There are about 300 lakes with total area of five thousand hectares. Most of them are small, closed lakes, and many are overgrown with peat layer. Origin of the lakes is different. Numerous lakes, oxbow lakes scattered along river valleys. The largest of them - Urvanovskoe (12 km long) and Vishal (length about 10 km). In Meshcherskaya lowlands and the north-west of the lake there are ancient alluvial valleys: Isihry , Holy, etc. The lakes of karst origin, located in the lower reaches of the Klyazma and center Vyazniki County (north-east region), are strongly mineralized water and connected with an underground watercourses. The largest and deepest of them - Lake Kschara . In the District of Aleksandrov and Yuriev Polish district meet glacial lakes of small size.

The main arrays swamps of the region (their total area is 37.4 thousand hectares) occur in Meshcherskaya and Balakhna (north-east region) lowlands. 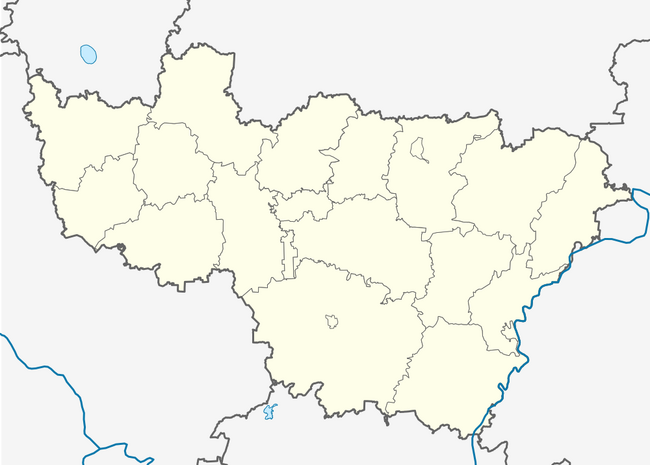