Walter Clarke (1640–1714) was an early governor of the Colony of Rhode Island and Providence Plantations and the first native-born governor of the colony. The son of colonial President Jeremy Clarke, he was a Quaker like his father. His mother was Frances Latham (1609-1677), who is often called "the Mother of Governors." While in his late 20s, he was elected as a deputy from Newport, Rhode Island, and in 1673 was elected to his first of three consecutive terms as assistant. During King Philip's War, he was elected to his first term as governor of the colony. He served for one year in this role, dealing with the devastation of the war, and with the predatory demands of neighboring colonies on Rhode Island territory during the aftermath of the war.

While voted out of office in 1677 by the "War Party," he was soon back in office as deputy governor, serving continuously in this capacity from 1679 to 1686, until once again being elected governor. His time in office was very short, because the new English king, James II put most of the American colonies under a single royal governor, Edmund Andros, and Rhode Island fell under the Dominion of New England for three years. The flight of King James II to France in 1689, and the subsequent ouster of Andros from New England, brought about the restoration of Rhode Island's government under the Royal Charter of 1663, but Clarke refused to serve as governor. Eventually, following the death of Governor Caleb Carr in 1695, Clarke once again accepted the governorship.

His final two years as governor were marred with jurisdictional issues from the crown, and following the threat of impeachment, he resigned as governor in the spring of 1698, being succeeded by his nephew, Samuel Cranston. Always with public service in his heart, he nevertheless became deputy governor of the colony in 1700, and served in this capacity every year until his death in 1714.

Born in Newport on Aquidneck Island (later Rhode Island), Walter Clarke was the son of colonial President Jeremy Clarke and his wife Frances Latham.[1] His father was an early Quaker settler of the colony,[1] and he became a Quaker himself.[2] In 1667 Clarke was elected as a Deputy to the General Assembly from Newport, launching a public career that would span nearly half a century. He was again elected Deputy in 1670, 1672, and 1673, and then was chosen as an Assistant for three years from 1673 to 1676.[3] Under the Royal Charter of 1663, the freemen of the colony elected a governor, deputy governor, ten assistants, and a number of deputies from each town, the entire body being called the General Assembly.[3] Eventually, the House of Deputies became the Lower House of the legislature, and the Assistants became the Upper House (Senate).[3] The Assembly met twice a year, in May and October, and also acted as the judiciary for the colony, in conjunction with the governor and deputy governor.[3] The biggest concern of the colony during Clarke's tenure as deputy or assistant was depredation of Rhode Island's territory by the neighboring colonies, particularly Massachusetts and Connecticut.[4]

Clarke had a total of four wives, the second of whom was a niece of Anne Hutchinson and the third of whom was a daughter of Roger Williams. Two of his sisters married colonial Rhode Island governors.

Clarke was married four times, and had eight known children.

He was first married about 1660 to Content Greenman, the daughter of John Greenman, With his first wife, Clarke had three children,

And a year after her death in 1666 he married Hannah Scott, the daughter of Richard Scott and Catharine Marbury. Catharine was a sister of the famous dissident minister, Anne (Marbury) Hutchinson. and with his second he had five more children.

Following the death of his second wife in 1681 he married Freeborn Hart, the widow of Thomas Hart, and the daughter of Providence founder Roger Williams.

Following her death in 1710 Clarke married a fourth time, to Sarah Gould, the widow of John Gould, and the daughter of Matthew and Mary Prior. 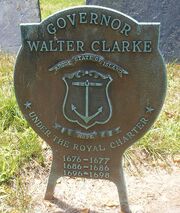