Edit
watch 01:36
We're Getting Mutants in the MCU - The Loop
Do you like this video?
Play Sound
Weldon Earl Borland (1906-2002)
Ancestors
Descendants

He was born on July 3, 1906 in Bowerston, Monroe Township, Harrison County, Ohio

Weldon grew up in the town of Bowerston, Monroe Township, Harrison County, Ohio. His father owned a general store and meat packing business where his mother Lizzie also worked. Weldon also helped out in the store as a youth. As a child, Weldon remembered taking trips out to his grandfather Samuel Hoobler Miller's farm in Coshocton County, Ohio. The farm was rich in oil, and as such the Miller family, including Weldon's mother, was relatively wealthy in the community.

Weldon first married Elizabeth Marie Forbes (1905-1983), but the marriage only lasted several days. The couple had moved in with one another for a short period of time in an apartment in Bowerston, and separated around the time that the apartment was furnished. They had one child, John Earl Borland I (1924-1986). Weldon married second Vivian Kniseley (1910-1991), later in life and had one son named Jeff by her as well.

Weldon had one sister who survived to maturity, Ruth Eleanor Borland (1914-1990). He also had two twin sisters that died early in childhood.

He worked for the Buckeye Cereal Company. Weldon then learned the trade of industrial sewing when he was hired by Goodyear to sew materials together to make Goodyear blimps. After some time working for Goodyear in the United States, he was involved in putting together a Goodyear plant in Buenos Aires, Argentina. Weldon left Goodyear to start his own sewing business called "Volume Sewing." In addition to making boat covers, bed clothes and other household and personal use items, Weldon's business landed several major contracts including sewing some of the first space suits, parachutes for test pilots, and outfitting several armies. His business took him to Mongolia, Thailand and much of South America. In later years, he proudly told stories of having met numerous heads of states.

Weldon's business was headquartered in Akron, Summit County, Ohio, and he kept a home there in a wealthy community. His wife Vivian was a member of the Akron Woman's City Club. Weldon enjoyed dining at the Tangier Restaurant and would often entertain clients, family and friends there. Weldon also kept a summer home on Tappan Lake in Harrison County, Ohio. He kept a boat in good repair and enjoyed spending his free time fishing.

Weldon returned year after year to go fishing on the Pickerel River in Ontario, Canada. When he first began making the trip, he would assist the staff in bringing the materials for cabins over the ice when the river froze. Even today, the Kagamaga resort camp is not accessible via roadway. Often, he would take fishing trips to Squaw Lake where he would have to carry the boat over land to reach his destination, a lake rich in pike and pickerel, as well as assorted bass varieties. Weldon was well into his 80s when he made his last trip, accompanied by grandchildren and great-grandchildren. Had Weldon lived a few more months, he would have met his first adopted great-great grandson Jaras.

Weldon E. Borland, 95, died March 2, 2002. Born in Bowerston, Ohio, he was a 32nd degree Mason and Shriner and the owner of Volume Sewing Company for 40 years. Preceded in death by his wife, Vivien Borland and son, John Borland; he is survived by his companion, Rosalie Simmons; son, Jeff Borland; grandchildren, Cindy and Susan Borland, Debbie Stacklin, and Steve Borland; great-grandchildren, Victoria and Christopher Borland, Kevin and Stephen Borland. Services will be held 2 p.m. Tuesday at the R. K. Lindsay Funeral Home in Dennison, Ohio, with Rev. John Johnson officiating. Interment at Long View Cemetery. Friends may call at the Billow Fairlawn Chapel, 85 N. Miller Rd., Monday 2 to 4 & 6 to 8 p.m. and one hour before services Tuesday in Dennison, Ohio. Should friends desire, memorials may be made to Shriner's Hospital for Crippled Children, 1645 W. 8th St., Erie, PA 16505.

Kevin Borland (1975) writes in 2015: "Weldon was a very particular man. He often insisted on the precise manner in which things must be done, and would sometimes hold grudges when his requests were not honored, or when tasks were not completed to his satisfaction. However, Weldon was also a very kind and generous man with a warm heart and a nostalgic air about him. He enjoyed teaching others about the things he learned throughout his long life via trial and error, and he had many interesting and sometimes very moving stories to tell. Weldon was quick to offer assistance in any way he could, whether financially or otherwise, although he often alienated himself from others due to his somewhat coarse mannerisms. Anyone who knew Weldon would say that he was a man who regarded his self dignity in high regard, as was evidenced by the fact that even a generation after his retirement, he would still wear a suit every day. He also insisted on maintaining his driving privileges for a long period of time after his eyesight had failed beyond a point where he should have been operating a vehicle." 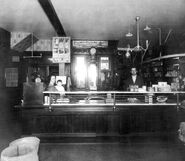 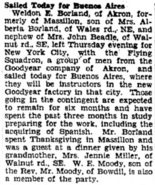 1990-2000 circa. Weldon with his great-grandson Kevin Borland
Community content is available under CC-BY-SA unless otherwise noted.
Advertisement