Wickham which was a Misspelling of Whickham, a suburb of Newcastle upon Tyne in the north of England. Means village by the creek. Wickham was proclaimed a Municipality in the NSW Government Gazette, 27 February 1871,[1] largely by the efforts of James Hannell, who became Wickham's first mayor.[2]

Wickham railway station opened 2 September 1936[3] on CityRail's Newcastle and Central Coast line and Hunter line. The railway line is part of the Newcastle-Maitland line, the first section of the Main North line from Sydney to the New England region, opened in 1857.[4]

Wickham is a well represented in the Newcastle cricket competitions. The local district team is known as the HamWicks (a combination of the suburbs Hamilton and Wickham). The suburb is also well represented in the City and Suburban Cricket competition. There are three teams in this competition all of which are sponsored by a local pub called 'The Lass O'Gowrie Hotel', the standout team of course being The Lass O'Gowrie All Star Warriors who are well known for their perfect run in the 2010/2011 season. They were also voted Newcastle's best looking cricket team.

Wickham Public School was built in 1904 and based on the Edwardian style of building.

The former infants school was built in 1892, employing elements of the Victorian Gothic and Italianate style. 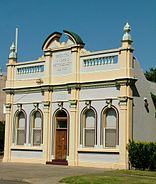 The former Wickham council chambers. Erected in 1889. Now used as the Wickham Pre-School