Familypedia
Register
Don't have an account?
Sign In
Advertisement
in: Cavendish (surname), Born in 1590, Died in 1628,
and 5 more

He was the second son of William Cavendish, 1st Earl of Devonshire, by his first wife Anne Keighley. He was educated by Thomas Hobbes, the philosopher, who lived at Chatsworth as his private tutor for many years and accompanied him on the Grand Tour between 1610 and 1615, visiting France and Italy before his coming of age. Hobbes praises his learning in the dedication of his translation of Thucydides. Cavendish was knighted at Whitehall in 1609.

He was a leader of court society, and an intimate friend of James I. He was M.P. for Derby in 1621, 1624, 1625, and 1626; lord-lieutenant of Derbyshire in 1619 and in 1625-6; and high bailiff of Tutbury in 1626. In April 1622 he introduced to audiences with the king Schwarzenburg, ambassador from the Emperor Ferdinand, Valerssio from Venice, and d'Arsennes and Joachimi from the United Provinces. In 1625 he was present at Charles I's marriage with Henrietta Maria.

Early in 1626 the death of his father gave him a seat in the House of Lords, and he resisted George Villiers, 1st Duke of Buckingham's attempt to find a treasonable meaning on a speech of Sir Dudley Digges (13 May 1626). His spending strained his resources, and he procured a private act of parliament to enable him to sell some of the entailed estates in discharge of his debts (1628). His London house was in Bishopsgate, on the site afterwards occupied by Devonshire Square. He died there, from over-indulgence it was said on 20 June 1628, and was buried in Allhallows Church, Derby. 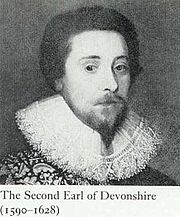