Familypedia
Register
Don't have an account?
Sign In
Advertisement
in: Of England (surname), Born in 1027, Died in 1087,
and 18 more

William I of England ‡

Duke of Normandy
King of England

The name "William the Bastard", a name used by his enemies arose from the fact that his mother was a Tanner's daughter who agreed to be his father Robert II's mistress. She demanded that their relationship not be secret, and had a position in court. After the affair was over, she married a Viscount. William retained the favour of his father and when Robert II left for the Holy Land, he forced his lords to pledge fealty to William. Robert II never returned from the Holy land and the oath was quickly forgotten, and intrigue surrounded the boy Duke. William's guardian Gilbert of Brionne was murdered, as was his tutor, as was his uncle Osbern- killed while protecting William from kidnappers found in his bedroom. William was sent away from home for his protection, and it was common practice for William's uncle Walter to awaken him in the night to move him to a new location.

By age fifteen, William was knighted, and by twenty he went to war against his cousin Guy of Normandy to defend his title of Duke of Normandy. With the help of King Henri I of France, he subdued his enemies who were forced to swear allegiance to William.

In 1051, William visited his cousin Edward the Confessor, king of England. Edward was childless, and William's account is that the king made him his heir. According to supporters of William, Edward sent his brother in law Harold Godwinson to see William in 1063. Other accounts say that Harold was shipwrecked. All accounts agree that William refused to let Harold depart until he swore on holy relics that he would uphold William's claim to the throne of England, and agreed to marry his daughter (then an infant) Agatha. After winning his release, Harold reneged on both promises.

In support of his claim to the English crown, William invaded England in 1066, leading an army of Normans to victory over the Anglo-Saxon forces of Harold Godwinson at the Battle of Hastings, and suppressed subsequent English revolts| in what has become known as the Norman Conquest.

His reign brought Norman culture to England, which had an enormous impact on the subsequent course of England in the Middle Ages. In addition to political changes, his reign also saw changes to English law, a programme of building and fortification, changes in the English language and the introduction of continental European feudalism into England.

In Falaise France, is a series of statues that pays tribute to the six Norman Dukes from Rollo to William Conqueror. The castle here was the principal residence of the Norman Knights.

William asked for the hand of Matilda of Flanders (c1031-1083), daughter of Count Baldwin V of Flanders, but Matilda would have none of it. Purportedly, she was in love with the English ambassador to Flanders, a Saxon named Brihtric, who declined her advances. As for William, she told his emissary that she was far too high-born (being descended from King Alfred the Great of England) to consider marrying a bastard. When that was repeated to him, William, all of 5'10", rode from Normandy to Bruges, found Matilda on her way to church, dragged her off her horse (some said by her long braids), threw her down in the street in front of her flabbergasted attendants, and then rode off. Another version states that William rode to Matilda's father's house in Lille, threw her to the ground in her room (again, by the braids), and hit her (or violently shook her) before leaving.

William convinced Matilda to relent, but the pope opposed the marriage because they were distant cousins. For a period of time all of Normandy was excommunicated along with their duke because William disregarded the pope's advice and married Matilda. In return for the construction of two abbeys, the excommunication of Normandy was lifted.

William and his wife Matilda of Flanders had at least nine children. The birth order of the sons is clear, but no source gives the relative order of birth of the daughters.

There is no evidence of any illegitimate children born to William.

Succession to the Throne

When William I died in 1087, his son William Rufus became king and ruled until his accidental death in 1100, leaving no heir. Henry I quickly siezed the English throne. In 1106 Henry I made war with his elder brother, Robert III, Duke of Normandy, defeating him soundly at the Battle of Tinchebray. Robert was spent his remaining 30 years in a Norman dungeon. 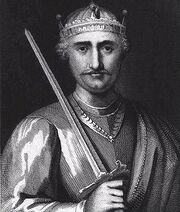