Familypedia
Register
Don't have an account?
Sign In
Advertisement
in: Brown (surname), Born in 1844, Died in 1923,
and 4 more

He married Margaret Aberdein on 13 September 1865 in the Central District, Glasgow, Lanarkshire. He was working as an iron moulder, probably in the shipbuilding industry, and living at 255 George Street, Glasgow. The couple moved back to Montrose for the birth of their first child, John Aberdein Brown, born on 8 September 1866 in Margaret's parents' house at 118 Castle Street.

The family lived in several addresses in Glasgow over the next several years. Their second child, Margaret Gilmour Brown, was born at 59 Washington Street; their third, Jessie Murison Brown, on 16 May 1870 at 71 Richard Street. John died of measles and bronchitis on 3 March 1871 at 36 West Bothwell Street. A fourth child, William Blair Brown, was born on 31 January 1872 at 466 St. Vincent Street, and a fifth, James Taylor Aberdein Brown, on 7 April 1874 at 13 Belgrave Street.

By 1876 they had moved just outside Glasgow city. Their sixth child, Elizabeth Watt Aberdein Brown (10 September 1876) and their seventh, John Aberdein Brown (8 November 1878) were born at 2 Clyde Place, Whiteinch, Partick. Their eighth, Andrew Brown, was born on 27 October 1880 at 83 Govan Road, Govan.

In the 1881 census the family were still at 83 Govan Road, but William was not at home. It is possible he had already moved to Belfast, the family following later. William and Margaret's ninth child, George Gardner Brown, was born on 15 July 1883 at 4 Thompson Street, Belfast. George died of congestion at the same address on 12 November 1885. Their tenth child, Alfred Alexander Brown, was born there on 20 June 1886, and Margaret married Thomas Honer from that address on 21 June 1892. He was still living there in 1900 according to the Belfast Street Directory for that year - the longest he had lived anywhere. By the time William junior married Margaret Logan on 3 September 1900, he had moved to 58 Beechfield Street, and was by now a foreman engineer.

When his wife Margaret died of apoplexy on 23 June 1903 he had moved to 15 Madrid Street, and was still there when Jessie died of pulmonary tuberculosis on 22 July the same year, when James married Letitia Milligan on 6 June 1905, and when Andrew married Honora Leith on 5 July 1906. By the time Elizabeth married Aaron Frost on 15 April 1908 he was living at 16 Campbell Park Avenue, where he was still living at the time of the census of 1911, by which time he had retired. Living with him were his unmarried son John, who had followed his father's trade as an iron moulder, his daughter Elizabeth and her husband Aaron Frost, and their two-year-old son Alfred.

He died of bronchitis at 30 Maymount Street on 4 May 1923, and was buried at Belfast City Cemetery three days later. 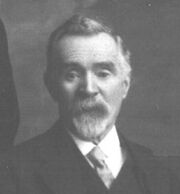