William Hydinger, son of Joseph Hydinger and Sarah Schopany, was born in West Virginia. At the age of 19, he enlisted as a Private in Co C 5th West Virginia Cavalry. He served until the close of the war. At the time of his death he was one of only two Civil War veterans left in Hamburg.

In the year 1865 William married Sarah E Cline of Wheeling, West Virginia. As a young man, William followed the occupation of truck gardening and farming in Virginia. Sarah and William had three children; Rebecca, Sarah, and Joseph. About 1880 they moved to Hamburg, Iowa.

For many years the family lived on a farm east of town, later moving to Hamburg where William resided for forty-four years. He was an active member in the Catholic church and for many years was a member of the Hamburg city council. He was know to all as "Uncle Billy."

After the death of Sarah in 1920, William lived with his daughter, Sarah E Miller and family. He died at home following an illness of many months, at the age of 96 years 5 months 23 days. 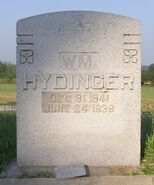