Familypedia
Register
Don't have an account?
Sign In
Advertisement
in: Denison (surname), Born in 1804, Died in 1871,
and 11 more

According to Serle, Denison was a man of high character and a good administrator. In his early days in Tasmania he spoke too frankly about the colonists in communications which he regarded as confidential, and this accentuated the feeling against him as a representative of the colonial office during the anti-transportation and responsible government movements. He showed great interest in the life of the colony, and helped to foster education, science and trade, during the period when Tasmania was developing into a prosperous colony. In New South Wales his task was easier, and he had no difficulty in coping adequately with the problems that arose during the early days of responsible government in Australia.[1]

Denison was the son of John Denison, and was born in London, England and educated at Eton College and the Royal Military College and entered the Royal Engineers in 1826. In November 1838 he married Caroline Hornby.[2]

Lt. Denison was one of the junior Royal Engineers who worked under Lt. Colonel John By, RE on the Rideau Canal in Upper Canada (1826 - 1832). Of note, Denison carried out experiments under the direction of Lt. Col. By to determine the strength, for construction purposes of the old growth Canadian timber in the vicinity of Bytown. His findings were published by the Institution of Civil Engineers in England who bestowed upon him the prestigious Telford Medal.[3]

Denison was offered the position of Lieutenant-Governor of Van Diemen's Land in 1846, and arrived at Hobart on 25 January 1847. Six members of the nominee Legislative Council had resigned in protest over the costs of the prison system, which was partly born by Tasmanians, and increased by the suspension of transportation to New South Wales. This meant the Council had no quorum. Due to difficulties in appointing replacements, Denison chose to rule without a functioning Council, even though this meant he could not pass legislation, including that needed to amend some tax laws that were subsequently found to be faulty.[2] He became at odds with the two judges; the power of the Council to levy taxes had been questioned, and Chief Justice Pedder and Judge Montagu concurred in holding that the Council had no right to levy a tax for other than local purposes. Denison thereupon charged the judges with neglect of duty in failing to identify the faults in the laws before they were enacted. He suggested that the Chief Justice should apply for leave of absence, and also found an opportunity to dismiss Montagu who was threatened with an action by a creditor. Denison was afterwards reprimanded by the Secretary of State, Earl Grey, for his conduct towards Pedder, but the dismissal of Montagu was confirmed.[1]

A report made by Denison to the Secretary of State, in which he spoke unfavourably of the colonists as a whole, was printed as a parliamentary paper, Denison naturally became very unpopular, and this unpopularity was not lessened by his attitude to the anti-transportation movement. He, however, succeeded in conciliating some of the citizens by granting 5 acres (20,000 m2) of land in Hobart as a site for an unsectarian school.[1]

In 1846, Grey's predecessor, Gladstone had suspended transportation of males to Tasmania for two years, and Grey had erroneously given the impression in dispatches to Denison that it would not be resumed, and Denison had passed this view on to the Legislative Council.[2] Subsequently, the British Government began sending convicts in large numbers. The Anti-Transportation League formed to oppose transportation had the support of nearly all the leading colonists of Tasmania, and as the other colonies took the same stand success became certain. The last ship with convicts for Tasmania sailed towards the end of 1852.[1]

While this movement had been going on, the question of granting responsible government had come much to the front. In 1850 an act for the better government of the Australian colonies was passed, which provided that the existing nominee councils should frame electoral acts for new elected councils. A council of 16 members was elected in Tasmania, all supporting the Anti-Transportation movement, and the governor's power was now much reduced. He, however, incurred some criticism by proclaiming pre-emptive right land regulations before the new Council met. The proclamation was intended to help to keep small holders of land in Tasmania, but the large graziers and speculators defeated this by taking up large tracts of land. Denison, however, became more popular towards the end of his term. In September 1854 he received word that he had been appointed Governor of New South Wales, and when he left Hobart on 13 January 1855 he received a cheque for £2000 from the colonists to purchase a piece of plate as a memento of his sojourn among them. After correspondence with the Secretary of State he was allowed to accept this.[1] One of his last official acts was to support the Legislative Council's request that the colony's name be changed to Tasmania.[2]

In 1856, Denison became both Governor of New South Wales and "Governor-General in and over all our Colonies of New South Wales, Van Diemen's Land, Victoria, South Australia and Western Australia", a new title, which implied a role in encouraging co-operation between the colonies. In response to the Crimean War, he strengthened Sydney's defences, strengthening the batteries on Dawes Point and building Fort Denison. He inaugurated the bicameral system of representative government in New South Wales, and showed wisdom and tact in his dealings with the problems which arose, including the handing of executive power to the new Parliament. He successfully opposed the Colonial Office's initial decision to put New England and the Clarence Valley in the new colony of Queensland. In 1859, he appointed Queensland's first Legislative Council and began the process of electing a Legislative Assembly, inaugurated on 22 May 1860. While he opened the colony's first railway in 1855, he ignored the problem of different rail gauges despite his role as Governor-General, although he was more active in developing arrangements for paying for postal connections with the United Kingdom, ameliorating inter-colonial tariffs and co-operation over the provision of lighthouses.[2]

Denison was responsible for closing the penal colony on Norfolk Island and for resettling the mutineers of the Bounty from Pitcairn Island. He initially instructed that the Island, except for certain public reserves would be vested in the Pitcairners, and was then forced by the Colonial Office to withdraw the vesting of land, leading to a lasting grievance.[2] When visiting New Zealand gave sensible advice to Colonel Gore Browne, which if followed, might have averted the New Zealand land wars. In November 1860 he received word that he had been appointed governor of Madras, and left Sydney on 22 January 1861.[1]

In India his training as an engineer was useful in connexion with irrigation of which he was a strong advocate. In November 1863, when Lord Elgin died, Denison for two months became Governor-General of India. In March 1866 he returned to England and prepared his Varieties of Vice-Regal Life, which appeared in two volumes in 1870. He died in East Sheen, Surrey and was survived by his wife, six sons and four daughters.[1]

The Institution of Civil Engineers in England bestowed upon him the prestigious Telford Medal for his paper on his experiments testing the strength of Canadian timber. He was one of the first recipients of this prize. 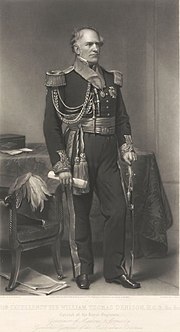