Lieutenant GeneralCo Founder of the CIA, Director of the Stragic Service Unit

Battle of the Bulge

Quinn was in Korea from 1951 to 1952 and in August 1951 Quinn was wounded in Korea. While in Korea he won and was awarded the Silver Star, Legion of Merit and the Bronze Star with the "V" Device. He was also in the Battle of Inchon. While he was in Korea he was the commanding Officer of the 17th Infantry Regiment which was part of the 7th Infantry Division (the 17th Infantry was, and still is, nicknamed "the Buffalo's"), named after Quinn. 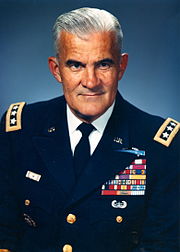