A World Heritage Site is a landmark or area which is selected by the United Nations Educational, Scientific and Cultural Organization (UNESCO) as having cultural, historical, scientific or other form of significance, and is legally protected by international treaties. The sites are judged important to the collective interests of humanity.

To be selected, a World Heritage Site must be an already classified landmark, unique in some respect as a geographically and historically identifiable place having special cultural or physical significance (such as an ancient ruin or historical structure, building, city, complex, desert, forest, island, lake, monument, mountain, or wilderness area). It may signify a remarkable accomplishment of humanity, and serve as evidence of our intellectual history on the planet.[1]

The sites are intended for practical conservation for posterity, which otherwise would be subject to risk from human or animal trespassing, unmonitored/uncontrolled/unrestricted access, or threat from local administrative negligence. Sites are demarcated by UNESCO as protected zones.[2] The list is maintained by the international World Heritage Program administered by the UNESCO World Heritage Committee, composed of 21 UNESCO member states which are elected by the UN General Assembly.[3]

The program catalogues, names, and conserves sites of outstanding cultural or natural importance to the common culture and heritage of humanity. Under certain conditions, listed sites can obtain funds from the World Heritage Fund. The program began with the Convention Concerning the Protection of the World's Cultural and Natural Heritage,[4] which was adopted by the General Conference of UNESCO on 16 November 1972. Since then, 193 state parties have ratified the convention, making it one of the most widely recognized international agreements and the world's most popular cultural program.

Template:Infobox treaty In 1954, the government of Egypt decided to build the new Aswan High Dam, whose resulting future reservoir would eventually inundate a large stretch of the Nile valley containing cultural treasures of ancient Egypt and ancient Nubia. In 1959, the governments of Egypt and Sudan requested UNESCO to assist their countries to protect and rescue the endangered monuments and sites. In 1960, the Director-General of UNESCO launched an appeal to the Member States for an International Campaign to Save the Monuments of Nubia.[7] This appeal resulted in the excavation and recording of hundreds of sites, the recovery of thousands of objects, as well as the salvage and relocation to higher ground of a number of important temples, the most famous of which are the temple complexes of Abu Simbel and Philae. The campaign, which ended in 1980, was considered a success. As tokens of its gratitude to countries which especially contributed to the campaign's success, Egypt donated four temples: the Temple of Dendur was moved to the Metropolitan Museum of Art in New York City, the Temple of Debod was moved to the Parque del Oeste in Madrid, the Temple of Taffeh was moved to the Rijksmuseum van Oudheden in the Netherlands, and the Temple of Ellesyia to Museo Egizio in Turin.[8]

The project cost $80 million, about $40 million of which was collected from 50 countries . The project's success led to other safeguarding campaigns: saving Venice and its lagoon in Italy, the ruins of Mohenjo-daro in Pakistan, and the Borobodur Temple Compounds in Indonesia. UNESCO then initiated, with the International Council on Monuments and Sites, a draft convention to protect the common cultural heritage of humanity.

A single text was agreed on by all parties, and the "Convention Concerning the Protection of the World Cultural and Natural Heritage" was adopted by the General Conference of UNESCO on 16 November 1972.

The Convention came into force on 17 December 1975. As of May 2017, it has been ratified by 193 states parties[9], including 189 UN member states plus the Cook Islands, the Holy See, Niue, and the State of Palestine. Only four UN member states have not ratified the Convention: Liechtenstein, Nauru, Somalia and Tuvalu. [10]

The Nomination File is evaluated by the International Council on Monuments and Sites and the World Conservation Union. These bodies then make their recommendations to the World Heritage Committee. The Committee meets once per year to determine whether or not to inscribe each nominated property on the World Heritage List and sometimes defers or refers the decision to request more information from the country which nominated the site. There are ten selection criteria – a site must meet at least one of them to be included on the list.[11]

Up to 2004, there were six criteria for cultural heritage and four criteria for natural heritage. In 2005, this was modified so that there is now only one set of ten criteria. Nominated sites must be of "outstanding universal value" and meet at least one of the ten criteria.[12] These criteria have been modified or/amended several times since their creation.

UNESCO designation as a World Heritage Site provides prima facie evidence that such culturally sensitive sites are legally protected pursuant to the Law of War, under the Geneva Convention, its articles, protocols and customs, together with other treaties including the Hague Convention for the Protection of Cultural Property in the Event of Armed Conflict and international law.

"Article 53. PROTECTION OF CULTURAL OBJECTS AND OF PLACES OF WORSHIP. Without prejudice to the provisions of the Hague Convention for the Protection of Cultural Property in the Event of Armed Conflict of 14 May 1954,' and of other relevant international instruments, it is prohibited:[14]

(a) To commit any acts of hostility directed against the historic monuments, works of art or places of worship which constitute the cultural or spiritual heritage of peoples;
(b) To use such objects in support of the military effort;
(c) To make such objects the object of reprisals."

Extensions and other modifications[]

A country may request to extend or reduce the boundaries, modify the official name, or change the selection criteria of one of its already listed sites. Any proposal for a significant boundary change or modify the site's selection criteria must be submitted as if it were a new nomination, including first placing it on the Tentative List and then onto the Nomination File.[11]

A request for a minor boundary change, one that does not have a significantly impact on the extent of the property or affect its "outstanding universal value", is also evaluated by the advisory bodies before being sent to the Committee. Such proposals can be rejected by either the advisory bodies or the Committee if they judge it to be a significant change instead of a minor one.[11]

Proposals to change the site's official name is sent directly to the Committee.[11]

A site may be added to the List of World Heritage in Danger if there are conditions that threaten the characteristics for which the landmark or area was inscribed on the World Heritage List. Such problems may involve armed conflict and war, natural disasters, pollution, poaching, or uncontrolled urbanization or human development. This danger list is intended to increase international awareness of the threats and to encourage counteractive measures. Threats to a site can be either proven imminent threats or potential dangers that could have adverse effects on a site.[15]

The state of conservation for each site on the danger list is reviewed on a yearly basis, after which the committee may request additional measures, delete the property from the list if the threats have ceased or consider deletion from both the List of World Heritage in Danger and the World Heritage List.[11]

Only two sites have ever been delisted: the Arabian Oryx Sanctuary in Oman and the Dresden Elbe Valley in Germany. The Arabian Oryx Sanctuary was directly delisted in 2007, instead of first being put on the danger list, after the Omani government decided to reduce the protected area's size by 90 percent.[16] The Dresden Elbe Valley was first placed on the danger list in 2006 when the World Heritage Committee decided that plans to construct the Waldschlösschen Bridge would significantly alter the valley's landscape. In response, the Dresden City Council attempted to stop the bridge's construction, but after several court decisions allowed the building of the bridge to proceed, the valley was removed from the World Heritage List in 2009.[17]

There are 1073 World Heritage Sites located in 167 states. Of these, 832 are cultural, 206 are natural and 35 are mixed properties. The World Heritage Committee has divided the world into five geographic zones which it calls regions: Africa, Arab States, Asia and the Pacific, Europe and North America, and Latin America and the Caribbean.

Russia and the Caucasus states are classified as European, while Mexico and the Caribbean are classified as belonging to the Latin America & Caribbean zone, despite their location in North America. The UNESCO geographic zones also give greater emphasis on administrative, rather than geographic associations. Hence, Gough Island, located in the South Atlantic, is part of the Europe & North America region because the government of the United Kingdom nominated the site.

The table below includes a breakdown of the sites according to these zones and their classification:[18][19]

*The property "The Architectural Work of Le Corbusier, an Outstanding Contribution to the Modern Movement" (Argentina, Belgium, France, Germany, India, Japan, Switzerland) is a trans-regional property located in Europe, Asia and the Pacific and Latin America and the Caribbean region. It is counted here in the Europe and North America.

Countries with ten or more sites[]

Countries with ten or more World Heritage Sites, as of July 2017. 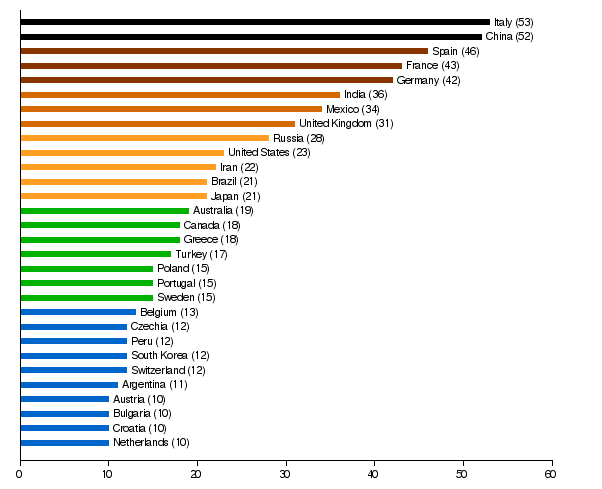 Despite the successes of World Heritage listing in promoting conservation, the UNESCO administered project has attracted criticism from some for perceived under-representation of heritage sites outside Europe, disputed decisions on site selection and adverse impact of mass tourism on sites unable to manage rapid growth in visitor numbers.[20][21]

A sizable lobbying industry has grown around the awards because World Heritage listing has the potential to significantly increase tourism revenue from sites selected. Site listing bids are often lengthy and costly, putting poorer countries at a disadvantage. Eritrea's efforts to promote Asmara are one example.[22]

In 2016, the Australian government was reported to have successfully lobbied for Great Barrier Reef conservation efforts to be removed from a UNESCO report titled 'World Heritage and Tourism in a Changing Climate'. The Australian government's actions were in response to their concern about the negative impact that an 'at risk' label could have on tourism revenue at a previously designated UNESCO World Heritage site.[23][24]

A number of listed World Heritage locations such as George Town, Penang and Casco Viejo, Panama have struggled to strike the balance between the economic benefits of catering to greatly increased visitor numbers and preserving the original culture and local communities that drew the recognition.[25]