Familypedia
Register
Don't have an account?
Sign In
Advertisement
in: Cities in Romania, Settlements in Sălaj County, Zalău

Zalău (German: Zillenmarkt, Waltenberg, Hungarian: Zilah) is the seat of Sălaj County, Transylvania, Romania. In 2004, its estimated population was 62,900.

Zalău is situated in the area inhabited by "Free Dacians", 8 km (5.0 mi) away from the historical landmark of Porolissum, a well-preserved Roman Castrum with an imposing fortress, an amphitheater, temples, houses and a customs house in the ancient Roman province of Dacia. Zalău was the crossing point between Central Europe and Transylvania, along the so-called "Salt Route".

Archaeological discoveries revealed evidence of human existence in this area since the Neolithic, approx. 6500 years ago. Dacian coins found in archaeological perimeters of the city central area and on the Valea Mâții, west of the city, plus important items belonging to Roman culture, are evidence of free Dacian continuity in this area and of developing economic relations with the Roman ancient city of Porolissum.

After the conquest of Dacia by Trajan (106), the Roman Empire border stood atop the Meseş Mountains, just 5 Km away from the city. Just north from the border, on the actual Zalău city area were the free Dacians tribes, and to the east, south-east (of Meseş Mountains) were Roman border fortifications, towers, walls, ditches and defense sides.

The first written mention about Zalău, was in the "Gesta Hungarorum", also called the "Chronicle of Anonymous" (probably notary of the King Béla III of Hungary), published around year 1200. According to this source, Zalău settlement would have been there as early as around 900. Later, Zalău is referred to as Villa Ziloc in 1220, Zylac in 1246, Zylah in 1282, Zyloh and oppidum Zylah in 1318, Zila in 1601, Zilahu in 1808, Sziláj / Szilágyi in 1839, Szilaju in 1850, and Zalău / Sziláju / Walthenberg in 1854. After the great Mongol invasion, which destroyed the city in 1241, Zalău came in 1246 under the administration of the Catholic Bishopric of Oradea. The trusteeship was maintained until 1542, when Zalău became part of Principality of Transylvania.

On August 1, 1473 Matthias Corvinus, king of Hungary and Bohemia, acknowledged Zalău as a market town for the first time (called oppidum Zilah - Zilah fort), a privilege that freed the city from the county domination, granted its citizens the right of free trade and gave it a larger degree of economic autonomy.

At the end of the 16th century, the city had an independent administrative leadership, composed of 33 elected senators (one of whom was the mayor), a notary, a registrar and a treasurer.

Other important events in the development of the city occurred in 1571 during the reign of Prince Istvan Bathory and in 1600 under the reign of Michael the Brave. After Transylvania had been annexed to the Habsburg Empire, the city experienced an economic decline due to infusion of products from the Western Europe.

The city was under the rule Principality of Transylvania between 1526-1660. It was also controlled by the Ottomans between 1660-1692.

The Calvinist college was formed in the first half of the 17th century.

Before the Treaty of Trianon, Zalău was one of the most important urban centers in the region. It had a Reformed college (Wesselényi college), a township school for civil service (for boys only), and a national civil school (for girls only). It had the largest hospital in the region and a tax revenue office.

Between 1892-1896, one of the most famous Hungarian poets Endre Ady attended the Protestant school in Zalău (since 1957 there is a statue of Endre Ady in the front of the school). The poet also published his first poem in the local newspaper "Szilágy" on March 22, 1896.

In 1876, Zalău became the seat of the Szilágy County. Since union of Transylvania with Romania (1918) it has been part of Romania - except between 1940-1944 when Northern Transylvania was under the Hungarian rule after the Second Vienna Award.

It was after 1960s when the city became a regional industrial center for the first time. During the communist regime, industrial factories like Armătura Zalău, Silcotub Zalău and Anvelope Silvania (bought recently by Michelin) hired thousands of workers, which also sparked an increase in population. The Romanian communist regime saw that thousands of Romanians from the South were brought and established into the region in an effort to uproot and outnumber the Hungarian majority population - this was in effect a form of ethnic cleansing and had the desired result: the Hungarian-Romanian population ratio is nowadays completely changed from what it used to be in the past, with the Romanians being now the majority and the Hungarians reduced to the minority. However, in the surrounding countryside this artificial Romanianization has failed. Many of the surrounding communes (for example Vârşolţ) are still populated in majority by Hungarians. This is the same for vast parts of Transylvania, and it is the same for the old German populations which were also effectively pushed out of the country by the Communists in the recent decades.

In the 1970s with the working-class population expanding, housing estates of high-rise blocks of flats were built in the centre as well as on the outskirts of the town. Many beautiful traditional buildings were destroyed and the town lost not only some of its architectural treasures but also its cultural identity. This sadly is once again the norm throughout most of Transylvania, and is part of the region's all too common story of devastation and destruction brought by Communism.

Today Zalău is crossed by European road E81 and the national road DN 1F. A new motorway (Transylvania Highway) is being built to connect Zalău to Western Europe. The town has two nationally accredited University colleges, a public library, one museum, an art gallery, more than four hotels, a motel, and two student halls of residence.

Zalău lies in the Zalău Valley, at the junction of the Apuseni mountains and the Eastern Carpathians, in Sălaj County, at 47°12′N 23°3′E﻿ / ﻿47.2, 23.05. Zalău is in the central part of Sălaj County, in Zalău River watershed where the depression of the same name and the Meseş Peak meet.

It neighbours Ţara Maramureşului and the county of Satu Mare, in the northwestern part of the historical region of Transylvania, which in the past was a mainly independent small state but since 1918 has belonged to Romania. It lies along the bank of the small Zalău River, between three narrow valleys in the Meseş Mountains. It is the county seat and the largest city in Sălaj County.

The city includes a total surface of 90.09 km2 (34.78 sq mi). This includes the one village it administers, Stâna (Felsőnyárló), situated south-east of Meseş, in the hydrographic basin of Agrij. Măgura Stânii has 716 m (2,349 ft).

The most important of the 24 monuments and buildings in the county capital of Zalău are: "Transilvania" (theatre in 1895), the city hall (court and seat of the prefects office in 1889), the Roman Catholic Church (1878), the reformed church (1904–1907), the Greek Catholic church "Adormirea Maicii Domnului" (1930–1934), the Orthodox deanery (built in late 19th century), the Historical Museum (built about 1900 - casino of the artisans fellowship), the primary school "Simion Bărnuţiu" (girls' school in 1895) and the National College Silvania (Reformed College in 1860), all these being valuable urbanistic elements for the historical and cultural patrimony of the land. The famous statuary group Wesselényi Monument of the heroic Hungarian nobleman with the same name (1902) by János Fadrusz, and the bust made in the honour of Simion Bărnuţiu by Romul Ladea are worth visiting as well.

Zalău hosts lively pageants each year, including a summer festival known as the "Zalău Days". There is a statue of Baron Wesselényi in Iuliu Maniu Square of the town center; the Tuhutum Memorial (both made by János Fadrusz in 1902); the Zalău County Museum of History and Art displays artifacts ranging from neolithic times to modern times, with a focus on the Roman period and hosts works of modern art. There are several churches, including the Calvinist cathedral, which is one of the most beautiful and largest in Transylvania.

The population of Zalău went through important evolutions throughout times (see above), and at present the data indicated by the census are the following: 62,927 inhabitants.

At the end of the 16th century, the town had an independent administrative rule made of 33 elected senators, from whom one of them was the mayor. There were also a notary, an archivist and a treasurer.

Formed by 21 members, the Local Council has the following attributes: to approve the local budget, loans, credit transfers and the means of use of the budgetary reserve; it establishes local taxes as well as special taxes; to elect the vice-mayors, to decide on the staff of attendants number.

Mayor Radu Căpâlnaşiu was elected first time in 2004 as member of Democratic Party and re-elected in 2008 as member of National Liberal Party.

The Zalău Municipal Council, elected in the 2008 local government elections, is made up of 21 councilors, with the following party composition:

The Zalău Municipal Council, elected in the 2004 local government elections, is made up of 21 councilors, with the following party composition:

Zalău also had a great handball team, coached by Gheorghe Tadici until 2006, who is also the head coach of Romania's national handball team.

Zalău is twinned with: 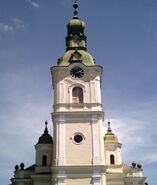