One of the First Seven Presidents to the First Quorum of Seventy when it was first organized on 28 February 1835.

Doctrine & Covenants 52 - Revelation given through Joseph Smith the Prophet on July 7, 1831 in Kirtland Ohio following a conference of the church. It directs a number of the brethren to embark in pairs on missionary journeys into the surrounding countryside. Verse 29 : "Let my servant Levi W. Hancock and Zebedee Coltrin also take their journey."

Elder in the New Mormon Church[]

On 9 January 1831, Coltrin was baptized into the Latter Day Saint church by Solomon Hancock at Strongsville, Ohio and ordained an elder of the church on January 21, 1831. Just weeks after, Coltrin was assigned to go to Missouri as a church missionary with Levi W. Hancock. On 17 July 1832 Coltrin was ordained a high priest and in 1834 he served another mission, this time to Upper Canada. Also in 1834, Coltrin joined Zion's Camp and marched from Ohio to Missouri to assist Latter Day Saints there.

Moved to Commerce, Illinois in 1839 but soon moved to Kirtland, Ohio. Appointed second counselor to Almon W. Babbit in Kirtland Stake, May 22, 1841 and received into Nauvoo high priests quorum June 4, 1843.

Their first son, John Graham was born in 1843 in Nauvoo.

The family fled the trouble in Nauvoo, about early 1846. The settled in a Mormon refugee camp at Bonaparte, Van Buren Co, Iowa. Children Mary (1846) and Julia Ann (1848) were born here.

Zebedee was part of Brigham Young's original Mormon Pioneer company that first came to Salt Lake Valley in 1847. Sometime afterwards he returned home to get his family. Brigham Young Pioneer Company (1847) / Departure: 14 April 1847 / Arrival: 21-24 July 1847 / Company Information: The original pioneer company consisted of 142 men, 3 women, and 2 children, and 72 wagons when they left the outfitting post of Winter Quarters, Nebraska. They covered the 1031 miles of the trail in 111 days.

Originally Coltrin settled his family in Palmyra, Utah Territory where two more children were born. But by the 1860 US Census, they had moved to Spanish Fork where a great number of his posterity would be found for many more years.

Zebedee married his first wife, Julia Ann Jennings, sometime before 1828 and she died in 1840. She bore him four children, but none of these survived to adulthood.

After the death of Julia Ann, Coltrin married his second wife, Mary Mott, in Feb 1841, and fathered nine children.

Genealogical records show marriages to several other woman, none of which has any corroborating documentation. They do not appear with him in any immigration records or census records:

In 1873, John Taylor ordained Coltrin to be a church patriarch, a position he held until his death in Spanish Fork at the age of 83. 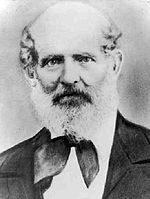