Familypedia
Register
Don't have an account?
Sign In
Advertisement
in: Huntington (surname), Born in 1821, Died in 1901,
and 2 more

Zina Diantha Huntington Jacobs Smith Young (31 January 1821 – 28 August 1901) - was an American social activist and religious leader who served as the third general president of the Relief Society of The Church of Jesus Christ of Latter-day Saints (LDS Church) from 1888 until her death. She practiced polyandry as the wife of Joseph Smith, and later Brigham Young, each of whom she married while she was still married to her first husband, Henry Jacobs.

Zina Huntington was born in Watertown, New York the eighth child of William and Zina Baker.[3] She was taught household skills, such as spinning, soap making, and weaving, and received a basic education. She developed musical talent by learning to play the cello. In 1835, when Zina was fourteen, her family was contacted by Hyrum Smith and David Whitmer, missionaries of the Church of the Latter Day Saints. With the exception of her oldest brother, the entire family joined the church. Zina was baptized by Smith on August 1, 1835.

After receiving advice from Joseph Smith, Sr., Zina's father sold their property and relocated to the church's headquarters in Kirtland, Ohio. Zina was a member of the Kirtland Temple Choir. Nineteen months later, the family moved again to Far West, Missouri. They arrived in Far West at a time of violence between Missouri residents and the newly arrived Mormons. After Missouri Governor Lilburn Boggs issued the Extermination Order, Zina's father helped coordinate the evacuation of church members to Illinois. During an 1839 cholera epidemic in Nauvoo, Illinois, Zina and her mother became ill. Her mother died but Zina recovered after receiving care in the home of Joseph and Emma Smith. Zina was eighteen years old.

After the death of Joseph Smith, Zina Young joined the Mormon Exodus to the Rocky Mountains, arriving in the Salt Lake Valley in September 1848. In Utah, Zina Young became involved in a number of public service activities. She became a school teacher and studied obstetrics under Willard Richards. As a midwife, she "helped deliver the babies of many women, including those of the plural wives of Brigham Young. At their request, she anointed and blessed many of these sisters before their deliveries. Other women in need of physical and emotional comfort also received blessings under her hands."[18] In 1872, she helped establish Deseret Hospital in Salt Lake City and served on its board of directors and for twelve years as president. She also organized a nursing school, with courses in obstetrics. In 1876, Zina was appointed president of the Deseret Silk Association,[19] a group which for 30 years attempted to cultivate silk worms and mulberry trees for the local production of cloth. She was also involved in LDS temple work, acting as matron to female temple workers.

When the LDS Church's Relief Society was reorganized in 1880, Zina was selected as first counselor by president Eliza R. Snow. The new presidency was active in refining the society's organization and functions, and helped develop additional church auxiliaries, including the Young Ladies' Retrenchment Association and the Primary Association for children. Zina was active in the temperance and women's suffrage movements, and, in the winter of 1881–82, attended the Women's Conference in Buffalo and a National Woman Suffrage Association convention in New York. In addition to Snow, Zina counted other prominent women in the Relief Society as her friends, including Bathsheba Smith and Emmeline B. Wells.[20]

In 1888, following the death of Snow, Zina succeeded her as the Relief Society's third general president and served until her death in 1901. In 1891, she was a vice president for the Utah National Council for Women. Zina died on August 28, 1901 at age 80.

Zina recorded in her autobiography that when she was twenty and being courted by Henry Bailey Jacobs, she received a secret proposal from Joseph Smith As Smith was already married, Zina claimed Smith explained to her that God was restoring the ancient order of plural marriage.Zina declined the proposal and on March 7, 1841, she married Jacobs. Nauvoo mayor John C. Bennett conducted the ceremony.

Zina wrote that within months of her marriage to Jacobs, Smith sent word to her that he had "put it off till an angel with a drawn sword stood by me and told me if I did not establish that principle upon the earth I would lose my position and my life." She and Smith were married on October 27, 1841. At the time of her marriage to Smith, she was about seven months pregnant with a child (Zebulon William Jacobs), which has been confirmed by DNA evidence to be fathered by Jacobs.[11] Jacobs eventually was made aware of the wedding to Smith, because after Smith's death in 1844, Jacobs stood by while Zina was sealed to Smith in the Nauvoo Temple.[10] After the 1841 wedding, Zina and Henry Jacobs continued to live together, except when he was away serving a mission.[12] Zina and Henry Jacobs had another son, Henry Chariton Jacobs, on March 22, 1846, almost two years after Smith's death.

Her first Husband was Henry Bailey Jacobs (1817-1886), who was aware of Zina's plural marriage to Smith. Jacobs wrote, "[W]hatever the Prophet did was right, without making the wisdom of God's authorities bend to the reasoning of any man." (Compton 1997, pp. 81–82)

While Zina and her brothers were living with the Prophet and Emma she met and became engaged to Henry Bailey Jacobs. They asked the Prophet to perform their marriage ceremony which was to be held at the County [sic] Clerk’s office [March 7, 1841]. When the couple arrived the Prophet was not there. After a wait, they decided to ask the clerk, John C. Bennett, if he would perform the marriage, which he did. When the couple later met the Prophet, Zina asked him why he hadn’t come as he had promised. He told her it had been made known to him that she was to be his Celestial Wife and he could not give to another one who had been given to him.

Wife #5: Zina Diantha Huntington (1821-1901) - Oct 1841 / age 20 -She was a polygamous wife of Joseph Smith, and later Brigham Young, each of whom she married while she was still married to her first husband, Henry Jacobs.

Her sister, Prescinda Huntington (1810-1892), was also a polyandrous plural wife to Joseph and then later to Heber C Kimball.

Soon after Smith's death in 1844, Zina was married to Brigham Young. In May 1846, Young called Henry Jacobs to serve a mission to England. During Jacobs's absence, Zina began living openly in a marital relationship with Young and continued to do so for the rest of her life, without ever obtaining a divorce from Jacobs.[13][14] She had one child with Brigham Young, Zina Prescinda Young, in 1850. 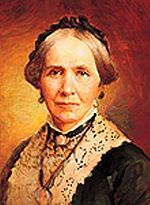