Familypedia
Register
Don't have an account?
Sign In
Advertisement
in: Courtney (surname), Born in 1882, Died in 1962,
and 5 more

Flora and George had married on September 12, 1877 in Knox County, Illinois.

She married Herman F. Hahnen (1880-1911) on June 26, 1901 in Galesburg, Knox County, Illinois. Herme was born in Des Moines, Iowa and his parents were from Germany. His father was Henry Hahnen and his mother was Sophia Beelser. Herme is sometimes listed as Walter Francis Hahnen.

In 1910 they were living in Des Moines, Iowa. Herm was working as a bank clerk.

Her husband died in 1911 and may have married a man named Krell. Her husband left a $9,000 ($214,000 in 2011) insurance policy. She was accused of buying items for herself rather than for her children: "Proceedings in probate upon the final report and discharge of Zora M. Krell (formerly Zora M. Hahnen) as guardian of her two minor children. Exceptions were filed to her report by Des Moines Savings Bank as guardian for the same wards, having been duly appointed as such upon the resignation of the mother. Upon the hearing of such exceptions her sureties upon successive bonds appeared and ninde defense. Each surety company also denied liability for any dereliction, if any, that might be adjudged against the guardian. The trial court overruled many of the exceptions presented by the plaintiff. It sustained plaintiffs exceptions to the extent that It found the former guardian to have been derelict as to a worthless loan of $1,800 at one time, and again as to another worthless loan to the same borrower to the amount of $237. The guardian was ordered to pay over such amounts with Interest from the date of the loans, and the sureties were held liable therefor, as will be later explained more In detail. From the order overruling its exceptions, the plaintiff has appealed. Prom the order finding the guardian liable for the items of $1,800 and $237, and finding the surety companies liable therefor, the surety companies (three in number) have each appealed. Mrs. Krell has not appealed. Modified and affirmed. ... The guardian whose accounts are under investigation was formerly Mrs. Zora M. Hahnen, the widow of H. F. Hahnen, .who died in February, 1911, leaving surviving him such widow and their two minor children, Gretchen and Robert, aged respectively 11 and 5 years. Nine thousand dollars came into the hands of the guardian as the proceeds of a life insurance policy in favor of the children. In March, 1911, she was appointed guardian, her bond being fixed at $9,000. The defendant Bankers' Surety Company became the surety on her bond for an agreed compensation of $30 per year. The conditions of the bond authorized the surety company to take joint control with the guardian of the money of the wards in her hands. At the expiration of one year the Bankers' Surety Company took steps under the statute to be relieved from the further liability of such surety. Such proceedings were consummated about April 15, 1912, and a formal order was entered discharging such surety company from further liability on its bond. On the same date the defendant American Surety Company became surety for the guardian upon a bond of $9,000, and this also was for a compensation of $36 per year, and upon the same conditions as to Joint control as the bond of the previous surety company. At the end of one year this company also took steps under the statute to relieve Itself from further liability as surety and Instituted proceedings to that end. A formal order was entered on June 17, 1913, purporting to fully discharge such company from further liability. Prior to this time and at the expiration of the first year of suretyship of the American Surety Company the court had reduced the penalty of the bond to be thereafter required of the guardian to the sum of $2,500, and authorized her to procure a new bond In such sum. Such bond was procured from the defendant Lion Bonding & Surety Company as surety on April 23, 1913. In September, 1914, the mother resigned as guardian, and the plaintiff herein was appointed In her stead, and the Issue was made upon her final report as already Indicated. The mother therefore controlled the estate of her wards for a period of about 3V6 years. She made annual reports. These reports were approved from time to time without contest A multitude of Items enter Into the dispute now presented, but we shall not undertake to deal with them In detail. So far as mere expenditures were concerned, the principal of the estate had been reduced approximately $1,000. The estate was further impaired to the extent of about $2,100 In bad loans, as already indicated. On the appeal of the plaintiff we have to consider whether the trial court properly approved the expenditures reported by the mother guardian and properly approved the diminution of the principal fund to the extent of about $1,000 in 3% years. And we proceed first to a consideration of plaintiff's appeal."

In 1950 she became a Republican committeewoman in her district of Des Moines, Iowa.

1907 with children in Joplin, Missouri

1907 with children in Joplin, Missouri (cropped)

This article was created by User:Richard Arthur Norton (1958- ). 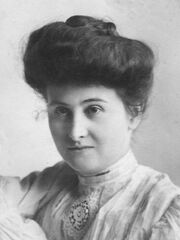